How one leaders actions and leadership impacted an entire class and the leadership style we used to guide future classes. 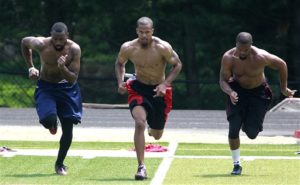 It was 430AM, 35ish degrees and slightly snowing in Richmond Virginia.  In the midst of an off season workout called ‘Mat Drills’  the team was taught a lesson in leadership.   Mat Drills were something I had heard horror stories about from the moment I set foot on campus.  These workouts put both your strength and endurance to the test.   There was no game in the near future so there was no reason to save your legs .  Coaches love that.  It wasn’t unusual to hear the hacking up of last nights dinner before drills were over.

It was my second time doing Mat Drills, and the answer is “yes, he did pee himself”. We had moved on to the 4th out of about 10 total drills when I noticed it.  The distinct smell and the growing wet spot was a clear signal that this man had just pissed his pants.

I thought  “did we already do the fireman carry drill?”, a drill where you have to carry a teammate through obstacles.   Then I thought “what would make a grown man piss their pants in front of 60 teammates”.  I mean, this is something out of a High School students nightmares, but no one said a word.  The captain continued to yell and encourage everyone to “FINISH!”, all the while coming in first in every drill.  No one said anything.

I didn’t notice it at first but the level of intensity during those drills rivaled the level of intensity of a game.  It hit me after drills were complete.  He pissed his pants because he didn’t want to miss a rep.  These drills, that everyone hated, were so important to him that he pissed his pants to avoid leaving the field.  That one action defined our team culture, and expectations of passion and commitment.

How Leadership Defined Our Culture

From that moment on, we attacked mat drills with the level of commitment and passion that our senior leader did.  I’m sure he didn’t realize it at the time, and I feel crazy saying it, but by pee’ing his pants defined the culture and expectations. My class took great pride in that culture and made sure to pass it down to future classes.

I don’t think I’ll be pissing my pants in my next team meeting but I will be conscious of how my actions as a leader can impact team culture.